Natural variation of water use in Arabidopsis thaliana.

Nearly 80% of the world’s water is currently consumed in agricultural irrigation. The improvement of plant productivity while reducing water use is an urgent objective to sustain or improve production while conserving natural resources. 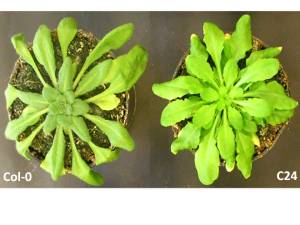 Enhanced drought resistance in C24. Plants were left to dry for 12 days after which a clear wilting response could be observed in Col-0 (Bechtold et al 2010).

To identify and exploit genetic loci that promote yield in water limiting environments is an important challenge in plant biology, and model species such as Arabidopsis are useful tools to achieve this objective.

Natural variation exists within Arabidopsis and comprises of thousands of accessions that are specifically adapted to the climatic and environmental conditions, and accessions display substantial variation in their response to and ability to resist drought stress. In previous work we have demonstrated that it is possible to combine traits that improve drought resistance and water productivity (defined as seed yield per unit water consumed) in the Arabidopsis ecotype C24 (Bechtold et al 2010; Bechtold et al 2018). My group developed a novel proxy trait to that allows us to estimate life-time plant water use (PWU) in combination with drought response traits (Ferguson et al 2018). We used these parameters to screen natural populations to identify a number of candidate genes for plant water use traits (Ferguson et al 2019). We currently focus on the ecotype C24, which combines low water use with leaf-level water use efficiency traits, which appear to be linked to a number of abiotic (ozone, drought) and biotic (bacterial pathogens) stress resistance phenotypes (Bechtold et al 2018).